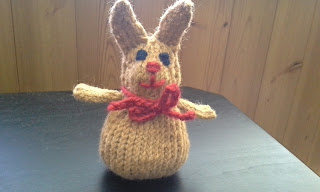 MATERIALS:
- 30 g knitting worsted, Color A (shown in rust);
- Small amount of knitting worsted, Color B, for ribbon OR about 6 inches of thin ribbon
- Small amounts of yarn for face
- 3 mm circular needle, 80 cm long, for Magic Loop;
OR 4 dpn 3mm for knitting in the round,
OR 2 regular straight 3mm needles for knitting flat (see Adaptations)
- Crochet hook for “neck ribbon”, about 3.25 mm
- Needle for embroidering and weaving in ends
- Polyester filling
- About 2 ml tiny polystyrene beads
- A small sachet bag or other little bag to contain the beads

GAUGE
Gauge is not important as long as it is consistent throughout. Figure will be about 4 inches (10 cm) tall. If you use heavier yarn or larger needles, the figure will be bigger.

ABBREVIATIONS
K = Knit
P = Purl
Kfb = Knit into the front and then into the back of the stitch; increase of one stitch
K2tog = Knit 2 stitches together; decrease of one stitch
P2tog = Purl 2 together
* = repeat the previous sequence to the end of the row
Rem = remaining
Sts = stitches
Dpn = double-pointed needles

NOTES
Baba’s Little Bunny is knitted in Stocking Stitch (aka Stockinette). In Magic Loop or knitting in the round, every round is knitted. (See Adaptations  to work flat.)

ARMS (Make 2)
With Color A, cast on 6 sts. Work I-Cord for 10 rows.
NOTE: This will not make a perfectly round cord. That is all right. It makes a cute arm.
Break yarn with a 12” long tail, thread through remaining stitches and tie tightly. Holding one arm on each side of the body at the neck, use the long tail(s) to sew the arms in place.

ADAPTATIONS
If you are not comfortable with the Magic Loop or with knitting on double-pointed needles, or if you only have regular knitting needles, you can knit the Bunny flat and sew up the seam in the back. Working flat, one row is knitted and the next row is purled for Stocking Stitch. Sew a seam down the back of the Bunny, leaving about an inch and a half open at the bottom to stuff, then finish the seam.

If you prefer not to purl, or just to achieve a different look, you can work the Bunny flat in Garter Stitch, that is, knitting every row. Sew a seam down the back and stuff as instructed above. Finish as above.

Posted by Rainbow Skyqueen at 09:03 No comments: